In this article I wanted to go over the baits I have had success with to catch Goliath Grouper with in the past.

As many people know by the name Goliath Grouper that these are big bad fish with a huge appetite! As their name suggests they are also the biggest of all the grouper with individuals reaching over 700lbs! 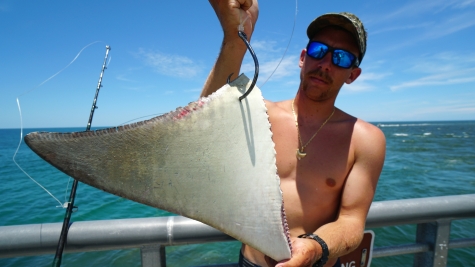 Goliaths can often be seen around structure including wrecks, reefs, inlets and bridges. They can be found at almost veery single bridge and jetty along Floridas East Coast, at certain times of year.

I often target them at the Sebastian inlet jetty, where they can be found in huge schools! One day my buddy and I were out there and pretty much any bait fish that was over 1lb and up we threw out there as bait. These included mackerel, moonfish, jacks, mullet, spadefish, croakers, catfish and more. One day we had no bait we noticed a large school of cow nose rays hanging around the inlet.

The rays themselves were around 30lbs, which we thought were far too big to put out as whole baits. So we decided to cut off their wings and use sections fo them instead. Sure enough the grouper took the bait! These weren't even big grouper, most in the 80lb range, but were feeding on 10+lb ray wings like nothing!

I have found that Goliath grouper enjoy a live meal over dead bait. However they will certainly eat a dead bait so long as it is fresh!

Catfish are another great Goliath bait, that I would never think another fish too consume but the Goliath love them! With these fish its go big or go home!