Fishing From Land In Miami

Compared to the rest of Florida, Miami is not the most land-based fishing-friendly city.  The city is known for its party culture and has grown from almost nothing in the '50s to a large metropolitan city with plenty of investment from Latin America and the Caribean as many use it to park their money in a less politically chaotic environment.  In recent years especially fueled by the Corona Virus, there has been a push from larger, more expensive cities such as San Fransisco and New York City where living costs have gotten out of hand and the politicians have gotten in on the action. This is not to mean that there are no fishing options from land in Miami, however, the "legal" spots are just less than it would be in a smaller Florida town.

Target Species From Land In Miami

Below are target species that can be caught from land in Miami in both freshwater and saltwater.

Saltwater Species That Can Be Caught From Land In Miami

There are a good number of species to be caught in Miami from the land. Below I will list a few:

Freshwater Species That Can Be Caught From Land In Miami 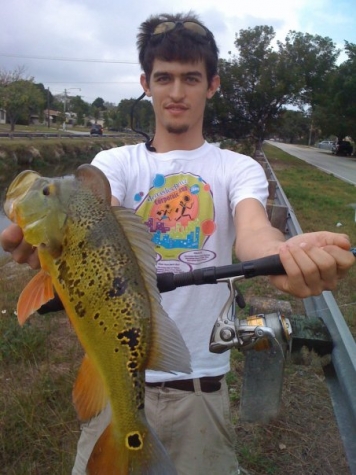 Where You Can Fish From Land In Miami (Saltwater)

Below is a great video posted on Youtube by "Sea-Money Fishing" that shows you what fishing looks like off of the Haulover Inlet:

2) South Beach- The fishing can be good on the Southernmost part of South Beach by the rocks in the early morning, and early evening when there are fewer people on the beach. This is especially true during the fall mullet run.

Below is a video posted by "" that shows you what the fall action can look like on South Beach.

3) South Pointe Pier - There is a fishing pier located on the inside of Government cut.

Below is a video posted by "Extreme Fishing Philly" that gives you a good tour of the pier.

Below is a video posted on Youtube by "Eliades Martinez" that shows you what fishing on the Rickenbacker Causeway looks like.

Below is a video posted on Youtube by "ExtremeH18" that shows you what fishing is like on the Bill Bags Piers.

Where You Can Fish From Land In Miami (Freshwater)

There are extensive canal systems in South Florida and lakes in Miami Dade County.

2) Lakes Behind Houses In Kendall

3) Lakes Behind Houses In Culter Bay