Fishing The Jetty At Doheny Beach

Where To Fish From Land In Dana Point

What Are The Best Times To Fish The Jetty

I usually made it down to the jetty in the evenings as part of a break between working before and after dinner. There were a few times I was able to bring my family down to the jetty, but most of the times I ventured down on my own.  I found the best fishing to be in the early morning or right around sunset. 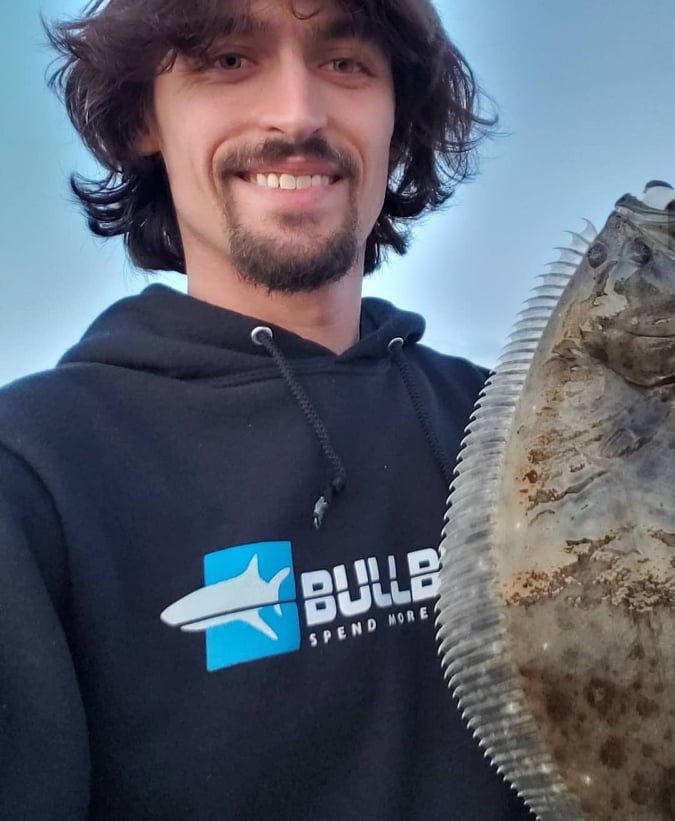 I caught this Halibut on a small (1/8 oz) jig head with a soft plastic.

There were many days that I got skunked, not going to lie.  I usually mixed it up between soft plastics, and bait. Tried one day with sharking equipment, but didnâ€™t get any results there. 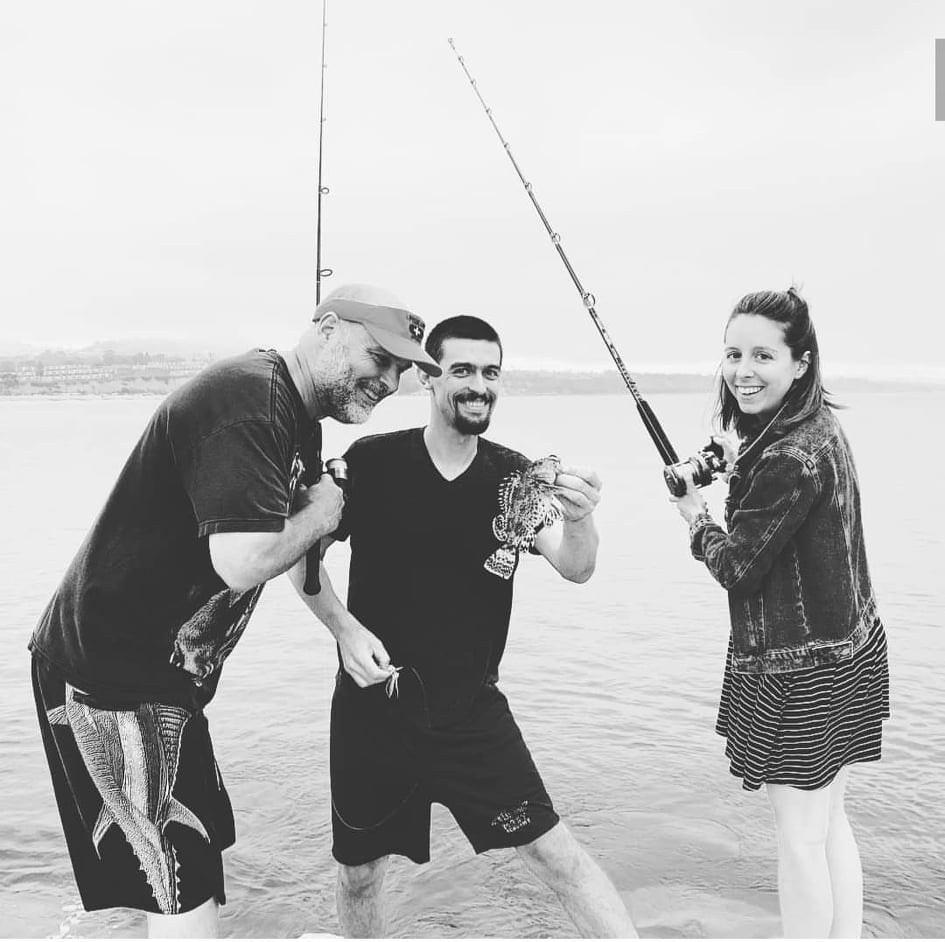 Uncle Kevin caught this Sculpin on a jig head tipped with squid.

I personally landed a halibut and some mackerel.  My Uncle Kevin landed a sculpin and Fiona lost something big in the dark, probably a big halibut.  During my hours on the jetty I saw people land a number of species including lobster, leopard sharks, more halibut, and a number of small fish, that looked kind of like a rockfish (Iâ€™m not really sure what they are). 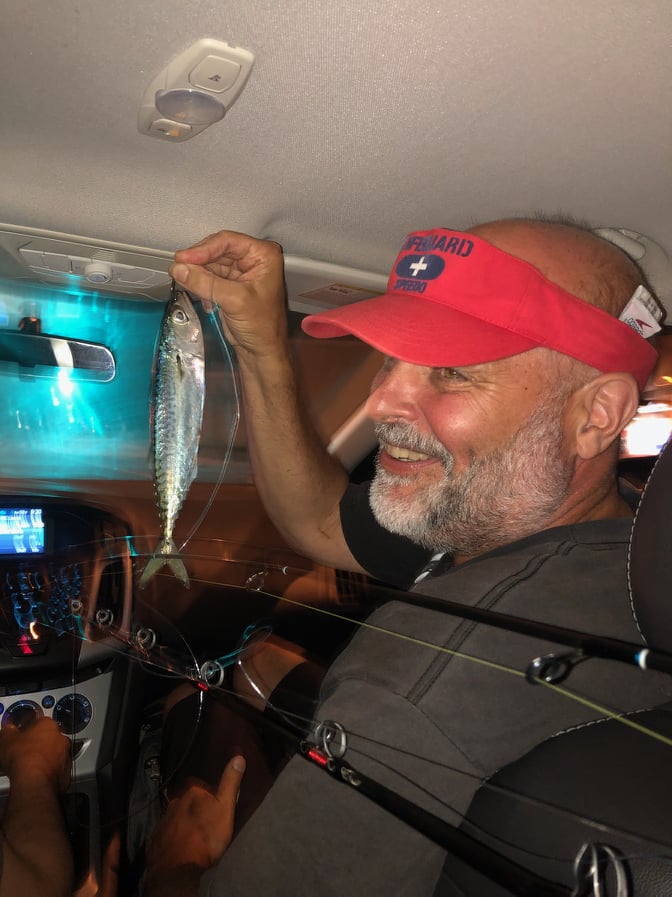 Uncle Kevin with a mackerel I saved for bait for a later trip.

While fishing on the Jetty I saw a number of spotted bay bass dart their way through, but never saw anyone land any of them.

Fishing For Spotted Bay Bass In San Diego From Land -

My First Impression Of SOCAL Fishing In January - When I first got to Southern California I really didn't know what to expect. My mobility was limited without a car, so I joined fishing clubs and got tips from local anglers and friends that had fished in San Diego. I spent the first few months Airbnbing and that allowed me to be near the action to see what was going on without having to p as a fortune for ubers. (Also see ubering as a fishermen).

Learning About All The Long Range Boats -

Coming from Florida I had always seen pictures of Cow Tuna lining the rails of big long range boats. It seemed so far, and so expensive for a young fisherman, actually out of reach. Before coming over here I did all of my research to learn about all the boats. It still astounds me the scale of the operation at H&M Landing & Fisherman's Landing. It's the most impressive fishing fleet I've ever seen.

Each boat is there own full on hospitallity business. They are basically floating hotels who compete on amenities,  "restaurants" as most have their own chefs and of course the most important "fish counts" which are regularly updated on the landings websites.

Fishing From A Center Console In San Diego

When I first came to San Diego I fell in the love with the marlin club building. It was fricking awesome. There is nothing like it that I ca  think of in Miami. It's a piece of history. Fishing history that is actually preserved, and that's something to speak of especially in 2020.

Anyways I went down there so often that eventually the weighmaster Roger asked me if I wanted to come speak at the club. So I did I gave a speech about the concept of Spend More Time Fishing which after much research I have found is responsible for most of the major innovations of the world from the conquest of much of The Roman Empire to the fricking lightbulb. As a matter of fact I found this out later but one of Andrew Carnegie's biggest scandals was when a fishing club that he was a member of "didn't keep up with" a damn they had bought and it killed thousands of people.

Oh back to fishing on a center console in San Diego. Yea I met Will at the club and he invited me to go fishing on his 18 foot Boston whaler out to the canyons for tuna and that was my first offshore experience in a private boat. Click the link up top to see that report.

Every year from January to February rockfish season in US waters closes for them suckers to spawn. You can still target them, but you will need to head south down into Mexican waters. By getting on a 3/4 day trip out of San Diego you should have plenty of time to get down there. What is nice about the trip is since it's a little specific, most people on the trip are decent fishermen and so you will have a pretty good crew to fish with. My first trip for Mexican rockfish was with JD on the Fisherman III , check it out at the link above.

My first full day trip I actually drove down. From Dana Point with my fiance Fiona to fish on the Liberty. We saw a ton of tuna but only one was caught, lucky for Fiona the crew hooked it and handed it to her because she was the only girl on the boat. While it was tough for me to watch her catch a bluefin before me after I cleaned the 40Lber at the house we had Sashimi for us and a ton of family members who visited. I hooked one on and iron on the surface but he pulled the hook.

After months of moving , tradeshows, setting up a new warehouse etc, I finally made it out on my first over night trip in Southern California aboard the Fury (I highly recommend this boat and Cpt. Marcus it's new owner). It was some of the most insane fishing I have ever experienced. While I had hoped for bluefin the quantity of yellowfin we caught more than made up for it. It was so wild in fact that at one point I switched to a 12Lb set up just to have fun with the yellowfin. We ended up leaving them biting because our boat full of 30 people had limited out. Take a look at the link above to read about that trip.

Fishing clubs are probably one of the best inventions in the fishing world. Fishing clubs are a great way to warn about a local fishery and its ins and outs. By joining a fishing club, not only will you learn more about that type of fishing, but you also meet new fishing buddies to go fish with, and learn of exclusive deals on tackle, trips and more. The link above is list of all of the fishing clubs in Southern California. If you want to fish out here. Join these clubs and get involved.

Drive South From San Diego To Fish  In Ensenada-

In March to take a break from moving Fiona from DC and busting our asses in the warehouse we took a trip down to Ensenada to fish and relax. Click the link above to learn more about that trip.

My article is mostly about the fishing aspect but the goal of Bullbuster is to help you spend more time fishing. If you have a family a lot of time that means getting them involved. Fiona wrote a great article covering this perspective with a Things To Do In Ensenada Mexico article.