Solo Shark Fishing, Sometimes you just have to go it alone.

Set out on a solo trip recently. Had the itch to get out and on this night the rest of the squad were occupied. I hit a Beach and put two 14/0's out. While I was wrapped in my blanket I got a call from Jonathan who said he felt like fishing after he got off work. I told him partner I got two rods out you can take one. 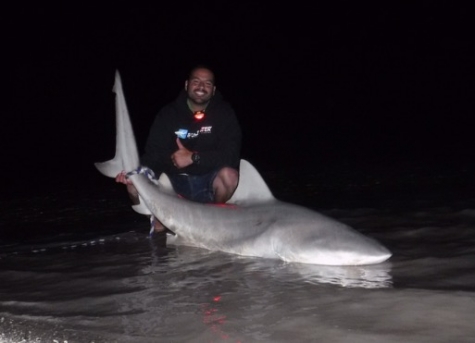 So Jonathan says he's on his way after work. I was laying in my blanket on the beach solo and remember being on the phone with JD when one of my 14/0's  filled with Bullbuster Monofilament gets picked up. I let the fish eat and then I stick em and the fight is on. After a good battle I see a Nice Sized Bull Shark. Not the biggest but it's a Nice Bull. Once I get it in really close I set the rod back in the spike and quickly grab the leader. I beach the Bull and put my camera on self timer, take a couple of pics, dehook the Shark and let her go. Just as I released the Bull Shark Jonathan shows up to the beach. He just missed it. The rest of the night is very quiet but a good night with a Nice Shark landed and good times on the beach.

We hope this article got you pumped to get out on the water. It's our mission to help you spend more time fishing.

Get a hold of our brand direct fishing lines to join a movement.