Overnight Tuna Fishing Aboard The Fury At Dana Wharf

For now at least, Dana Point California is one of the last small towns along the Southern California Coast with a wharf.  The wharf in Dana has a small bait barge that supplies a small charter boat fleet as well as a number of private boats (more private boats then in most Southern California towns).  Bait can be purchased only by boat, however a few clever jetty fishermen have devised methods, such as cutting a whole in a boogie board , and sticking a 5 gallon bucket in it, and literally swimming out to the barge to buy bait. 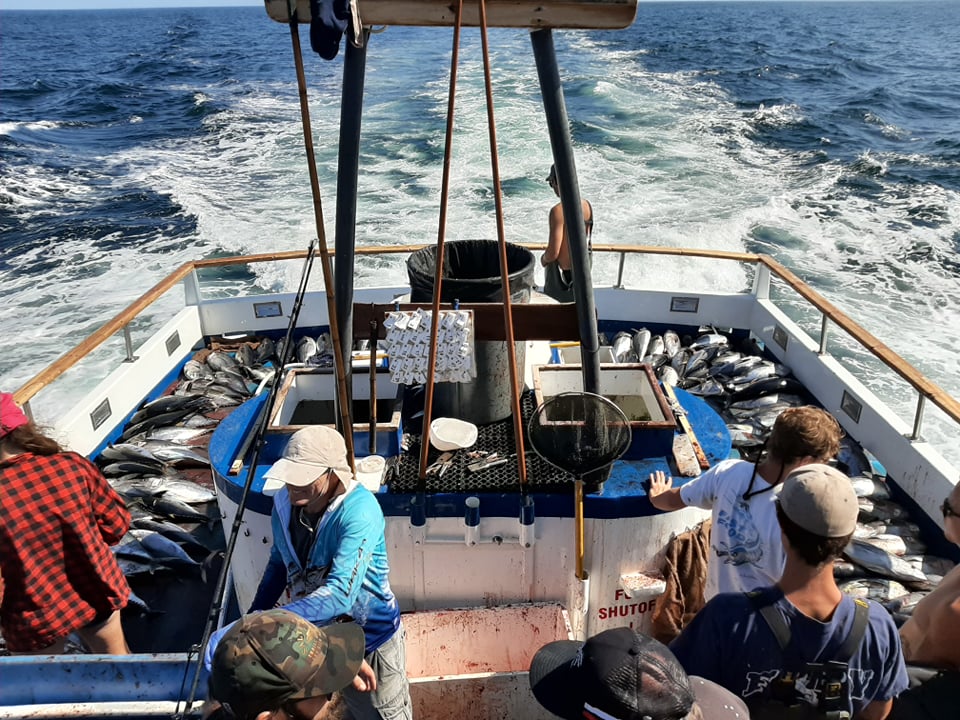 Dana Point is very close to the southernmost islands in the California island chain (San Clemente Island, and Catalina).  Being that it is a small town, there are still relatively inexpensive fishing options, especially during the off season. At the end of August, I booked an overnight trip aboard the Fury, the only overnight boat in the wharf , it is owned and operated by Captain Marcus.

Our trip boarded at 9pm, and as the crew loaded the boat with bait, Cpt.  Marcus gathered all 32 passengers (yes there was a very full trip) into the galley to discuss the plans for the trip.  The original plan had been to go to San Clemente, however the yellowfin tuna bite had been on fire down in Mexico, so he was looking for a unanimous vote to go south, meaning that everyone on the trip would need to buy their Mexican permits.

The possibility to get into schools of foaming tuna amongst a group of seasoned fishermen made getting that vote not hard. Soon we were slowly making our way down to Mexico.   Around 4:30 in the morning, the boat had arrived on the tuna grounds. Or at least thats when I woke up.

It was still dark, the boat was drifting and there were schools of small baitfish showering around the boat for at least 100 yds.  I grabbed my accurate 50, and dropped a flat fall. I worked it for about 45 minutes, up and down with no luck. I decided to call it quits and headed back to sleep to make sure I was fully conscious for the days fishing.

When I woke up, the whole boat looked like it had been awake and fishing for a while.  Within a few hours, with some bait being pitched, a few yellowfin started to show up and boil around the boat.  They were very finicky and only people fishing 20Lb fluorocarbon or lighter were getting hit.  I had expected to be on a trip targeting bluefin, so my lightest was 30Lb fluoro, and I did not get bit for the 1st few hours.  It was a frustrating experience, after seeing about 20 15-20Lb yellowfin being caught right next to me.

Finally, I sucked it up and asked one of my fellow anglers if he had any light fluorocarbon.  He was kind enough to lend me some 12Lb fluorocarbon and a very light hook. Still no luck. It was around 11 am , and Cpt. Marcus told everyone to wrap it up, it was time to start heading north.  I knew that the fishing was going to end around 2pm, so I was very discouraged with my own performance.

Around noon we pulled up to another boat and acquaintance of Cpt Marcus, that had just limited out on yellowfin.  We basically picked up where they had left off. Tuna were boiling everywhere. Since I had yet to catch one, I didn’t want to risk scaling down to 12Lb, so I pulled out my 50 (only had a 50, and small spinner with me), threw on some 30Lb fluorocarbon, and backed down my drag big time. 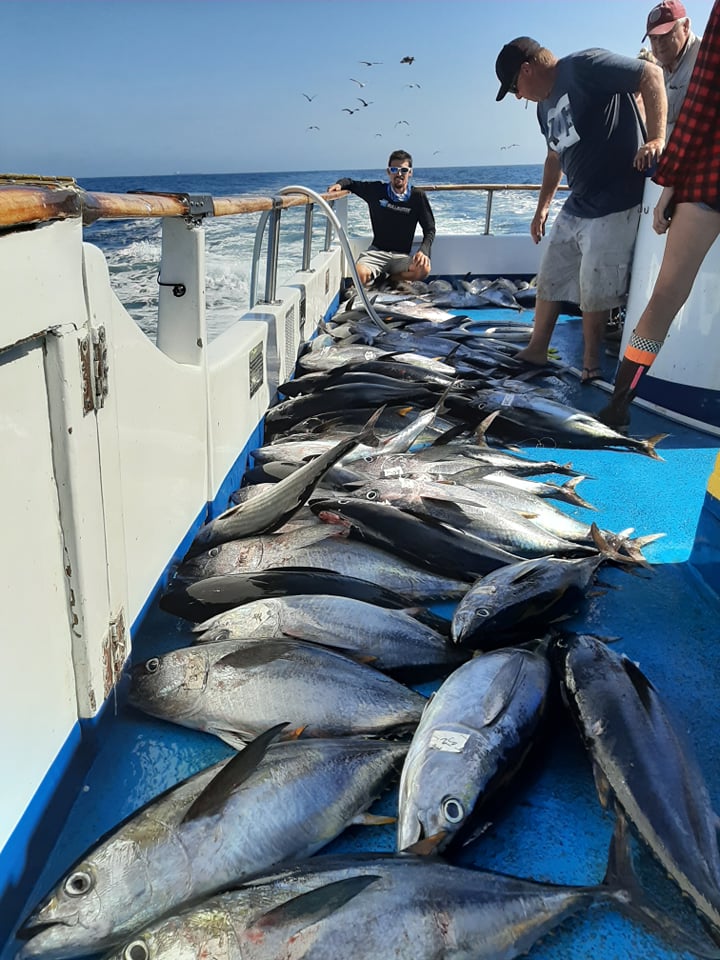 I started fly lining my sardine (the west coast equivalent to free lining), and within about 5 seconds I was bit!  My first yellowfin was in the boat a few minutes later. I have experienced party boat fishing where you have to walk under peoples rods before when fishing on the Reward Fleet in Miami, but this is a whole other ball game.  People on these boats know that you will need to get under them, and you need to follow your fish over and under people.  With 30 anglers and at any given time 15 of them being hooked up to yellowfin, this can get wild. It does get the adrenaline pumping, and sometimes tempers flair up, but if you put it in perspective to what it is, people seem to handle the mayhem quite well.

After landing 3 fish on heavy tackle and light drag, and knowing that the limit was 5 per person. I pulled out my spinning rod, a penn spinfisher 4500 spooled with 30Lb braid, and with the 12Lb fluorocarbon leader.  It was time to go light tackle and have fun with these fish. With the light tackle, I just let them take it and the fish just tired themselves out. It was a lot of fun, I landed two 15Lb yellowfin with this method.

I had the pleasure of fishing with an older gentleman in his late 70’s from Arizona, him and his wife and his son had come together.  His knees where done, and he had to sit up on the bow but boy was he still living life, he landed his own yellowfin as well.

I don’t think I saw a single angler was without a smile on their face on the ride home.  Plenty of meat would be brought home, and plenty of arms were sore, and bruised. I definitely recommend this trip for anyone in the Dana Point area.  This trip is $130 , which is much less expensive than leaving out of the major ports, with access to the same fish.