I recently felt an urge to take on a crazy fish that I only have caught a handful of times in my life.  This fish is only located in one body of water in the entire Western Hemisphere, as far as I'm aware of.  That body of water happens to be an hour and a half drive from where I live - the Lake Ida and Osborne chain.

I guide on request on this canal system, but only off of special requests to target one of these elusive fish.  Although it has excellent peacock fishing, I stick to guiding the clear waters (and my home territory) of Miami most of the time.

It was 11 PM and I was feeling antsy about fishing the following day, as I had the day off.  I made a last minute call to my friend Byron and at midnight we decided we were going to go up and target these elusive creatures.  Byron had never caught one (he had tried to fish the water with me once in the past) and was particularly intrigued about catching his first.

I left my apartment at 4 AM, picked up Byron and then picked up the boat. From there, we began an hour and 10 minute drive to the closest bait shop to Lake Ida we could find. We picked up 6 dozen shiners and got the boat in the water at 6:30 AM, an hour before sunrise.

The way to target these fish is very simple, using just a small live bait hoot attached to 20lb bullbuster monofilament leader material. From there, I simply used a double-uni knot to tie the leader directly to the 20lb bullbuster braid (in yellow) on my reels.  I was using a 4000 series Shimano Stradic Ci4 attached to a Medium action Shimano Teramar rod.

The weather was not good and the rain we drove through the entire way up only intensified on the 4 mile run we initially made deep into the canal system.  My goal was to fish some water that most people never got to, along with some very useful intel from good friend Patrick Gonzalez.

The first spot seemed dead, and with sunlight fast approaching we made our way over to a bridge. These fish feed at night so you have to take advantage of these early morning minutes.  We got under a deep bridge, my second spot, and Byron immediately got picked up.  A nice fight ensued and we knew we had a good fish on.  Shortly after, a beautiful clown knife was in the net.  It doesn't get any better than that!

We picked off a dozen or so peacocks and largemouth before continuing on to another spot.  The bycatch when searching for clown knifefish will far outnumber the target species, and by the time we were done with 4 or 5 of our main spots we had close to 50 fish in the boat over the course of 5 hours.

I had one final trick up my sleeve and that was to target some deeper drop offs for our last chance at another clown.  After working one particular drop and catching nothing but peacocks, I finally got a very fast take, something that often can mean it's a clown.  I came tight and immediately felt some very heavy weight on the line along with some very large sporadic headshakes. This wasn't fighting like a peacock.

After a long battle, the fish finally flashed and we saw it was a huge clown!  I loosened up the drag to ensure I didn't pull the hook on this fish, and after another minute we had landed this beast.  This fish came very close to breaking double digits. 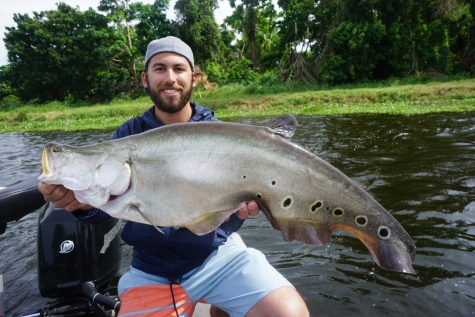 It was a fantastic morning and we each accomplished our goal of catching what is realistically the rarest game fish in North America.

If you are interested in coming down here and trying to catch one for yourself, just send me a message at www.peacockadventures.com