Puerto Vallarta is literally cow central, claiming the title to many world record yellowfin tunas.  As a matter of fact Puerto Vallarta has actually broken its own record a number of times. It was almost broken again in 2012 but was not broken due to a technicality.

Puerto Vallarta tuna fishing is all about small beefed up reels filled with 130Lb hollow core braid and  a few feet of fluorocarbon  (so you don't need a swivel or a knot) to get your A** kicked by a big cow tuna!

Check out this sick tuna fishing video out of Puerto Vallarta posted on Youtube by "Peter Kim" fishing aboard the Journeyman.

There are many ways to fish out of Puerto Vallarta these include:

Long Range Boats Out Of California

Puerto Vallarta tuna fishing is so good, that most of the long range boats out  San Diego  California make they're way down here to pick at the cow tunas.

Below a small sportfish boat circles Corbatena Rock with live skipjack tunas looking for a cow tuna or a big marlin.  Corbatena rock is a small rock island 35 miles outside of the Bay of Banderas.

A 12 hour charter on a large panga in Mexico to fish the famous tuna bank "El Banco" can run you less than $600 with the right negotiating skills.  Be sure to bring a little extra cash to make sure you load up on extra goggle eyes though.

One of the great things about fishing small Pangas in Mexico is that you can get a lot more fishing in than you might otherwise.  A week of fishing on a 30 foot panga won't cost you an arm and a leg and you will have a lot more time to adjust to the fishing conditions.

Be sure to try some PV style Sashimi while you are down there!

Bringing Your Own Boat Down There

If you are looking to make a long term investment in catching big tunas down in Mexico it may make sense to bring your boat down there.  Make sure you make a network that you can trust first though.

Large yellowfins can be found  in many places offshore the Galapagos islands.  The island of Isabella holds lots of small but continuously swarming yellowfins that circle large offshore rocks and are often mixed in with wahoo.

Fishing out of Isabela , Galapagos contact Manuco from the Hotel Casa De Los Delfines to find out more information about fishing trips.

Offshore the island of San Cristobal there is a large bank called Banco Rosa which has a number of big yellowfin as well as big striped marlin and blue marlin chasing them around.

Also bring lots of wire, the wahoo's are plentiful and it is VERY hard to find wire on the island.  The go to tuna lure is a large Rapala Xrap (bring these yourself too, they are worth their weight in gold down there).

Check out our article on how the Galapagos Islands helped form many of the Bullbuster ideals.

If you live in South Florida only an hour or two away ( depending on how many outboards you are packing on the back of your boat) is some world class Tuna fishing.

Check out this report by #BullbusterAmbassador Absolut Fishing of their Bahamas yellowfin trip.  Below are a few excerpts from the article : 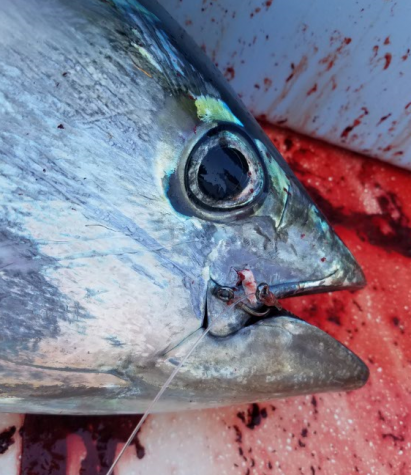 "The first trick to this is pretty obvious, find the birds. It gets tricky after that."

"These fish are very spooky. If you don't run up on them just right, you'll drive them down and miss your shot.. It's all about the chunks and drifting your hooked bait back naturally with the chunks."

5) Canyons Off Of Rhode Island

When it heats up in the northeast there are plenty of yellowfins to be found along with bigeyes.  The bluefin tend to be caught in the cooler months.

Check out the following fishing reports for yellowfin tuna fishing in the Northeast Canyons.

Check out some of his tuna fishing reports here:

Yellowfins & Bigeyes - The Tree Guy has an excellent night time bite offshore Rhode Island, check out some of the excerpts below:

"First cast TIGHT! The day seemed to fly by after this! We had boated over 100 Yellowfin Tuna and released about 60 of them due to size."

Canyon Fishing Trip - The canyons are like an offshore big game fishing jungle, plenty of fish species to catch yellowfin's, bigeyes, swordfish, mahi, you name it. This is also one of the few places that you are going to be catching tuna amongst whales, pretty wild!

"The yellowfin are always a blast.  Its awesome to hook up on  a pack of em, that is when mayhem ensues. "

Growing up fishing the Canyons of New Jersey gave marine artist and #BullbusterAmbassador Alex Wexler the inspiration that makes him one of the most renowned fishing sketch artists in the industry.  For Alex its not just about the fishing its about the process.

Oahu Hawaii has excellent yellowfin tuna fishing, except over there they are called Ahi. Boy are there some big Ahi over there, just ask #BullbusterAmbassador Jaren Luke.  He catches them on the troll way offshore as well as more inshore while kayak fishing.  For the big Ahi he is using 125Lb monofilament to catch the big boys on the troll.  When he is kayaking he is using small conventional setups in order to land 30-50 Lb ahi's with 40-50Lb braidand 40-60Lb fluorocarbon.

Below are a few articles and excerpts about Ahi fishing out of Oahu.

Late Seaon Ahi Fishing Tactics - Jaren Luke fishing aboard the Anne's Revenge to catch some monster late season Ahi on the west side of the island.

Many anglers take advantage of a quick run north of Bimini in the spring months to catch a TON of yellowfin.  However moving further into the islands works well as the summer moves on.

Grande Isle is well known for its redfish bite, but the tuna fishing out of Grande Isle can be excellent!

Bullbuster Ambassador Laurel David caught a yellowfin while fishing the edge in the spring of 2017 on 12 Lb Bullbuster Monofilament.

#BullbusterAmbassador L&H Sportfishing also caught a number of other Yellowfin throughout the season.

If you want to read more about yellowfin tuna or tuna fishing  in general here are a few more resources:

Yellowfin Tuna Fishing - This is a spot where you can find all of the articles about yellowfin tuna on the Bullbuster Community.

How To Cook Yellowfin Tuna- Tuna meat makes for excellent table fare.  Check out this article that has TONS of ways to cook yellowfin.

Ahi (Hawaiin Name For Yellowfin) - Check out yellowfin being caught in Hawaii.

Tuna Fishing - Tunas are all awesome, check out all of the articles involving tuna on the Bulllbuster Community.

Bluefin Tunas- The biggest tunas of them all.  Check out articles about bluefin on the Bullbuster Community.

Blackfin Tunas - Blackfin are a blast on light tackle. Check out all of the articles about Blackfin Tuna on the Bullbuster Community.

Bigeye Tunas  - One of the most sought after tunas in the ocean.