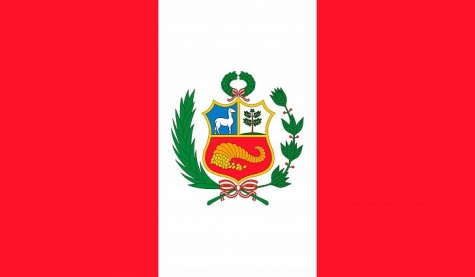 Peru was once one of the worlds most famous fishing destinations. Attracting the who's who from around the world including Alfred Glassell, Ernest Hemingway and Marilyn Monroe. Fishermen gathered at the Hotel Cabo Blanco to target the worlds biggest marlin. In fact Alfred Glassell's 1953 black marlin which was 1,453 Lbs caught at Cabo Blanco still remains the all tackle world record. Today, Peru's fishery is mostly industrialized with factories lining the coast processing netted fish from fleets of boats from large to small.  The coast is still very bountiful supporting large bird populations, but nothing like it was back then. Today's Cabo Blanco resort, is not what it once was. (Learn More About The Cabo Blanco Resorts Current State Here). 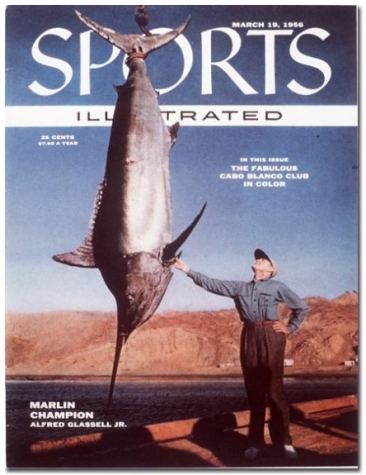 My experience of Peru fishing was from a different scale, a family scale.  I went to Peru to meet Fiona's family for during New Years. This was my first year moving the company out to San Diego, and the flights were wildly expensive for Christmas, so I had spent my first Christmas alone in my life.  On my way home I flew through Miami and met my sister and my Grandma and aunt for lunch. This was good because our Nonita left us later in the year. Anyways , back to the fishing.

During my initial move of the company to San Diego, I had sold my rod case , so I could only bring reels. Awesomely, Fiona and her mom went looking for fishing rods in Lima, because we would be leaving shortly after I arrived to head south to Paracas.  Apparently with all of its modern innovations (Lima is quite modern looking compared to many cities in Latin America that I have been to) . Lima only has a few fishing stores, and one of these "stores" is literally in someone's apartment.  If you are reading this bring your own gear, and never make the dumbass decision to sell your travel rod case.  Thankfully they found a store with somewhat reasonable gear at decent prices.  They purchased two rods, and a few lures that the store recommended.

Paracas Peru Fishing From The Beach & By Panga

I arrived in Lima and we did a bunch of other things, but since this is a fishing article I will not cover them. From Lima we drove several hours south to Paracas.   Paracas is an interesting place. Its a place where the sea meets the desert. Its one of the most insane landscapes you will see in your life. At the apartment in Paracas that Fiorella and Paolo had rented there was a small fishing pier, and I told everyone that I was going to step out to make some casts.  Turns out everyone wanted to come try the new activity. A few lost lures later it was confirmed that everyone had upped their casting game. They thought I was frustrated about it, but its fishing, and it was good to have everyone out casting on the pier. (ok, I don't like loosing lures, but I do like having people to go fishing with).

Going On A Family Fishing Vacation?

It looked like this was going to be a bait spot.  To make something really happen, but thats not something that we had on hand. The next day Fiona, Paolo, Jersen, and I set out on our own fishing expedition. We would go into the park and explore.  We woke up early enough that the ranger had not arrived yet and the gate was open. We also made a pit stop into a nearby fishing village to gather bait and some supplies. We didn't have much luck, except for a few crabs, but they enjoyed the beach enough that we would be bringing the rest of the family back here again.

Paolo seemed to pick up most of the things naturally. Jersen on the other hand asked lots of questions, and when someone asks questions they are actually learning.  Jersen has since taken his family fishing a few times. With some good catches.

Next it was a boat adventure, and an adventure it was sticking 3 kids, and 8 adults on a panga. We drove to a remote village in the park where there as a small fishing port.  We found a panga with a bathroom on it (a porta potty), you could tell this was a fisherman that went out to see for multiple days at a time. These type of panga fleets exist in commercial fishing village fleets throughout latin america and, I have seen them while fishing in the  Galapagos, Costa Rica, Mexico, and I hear similar fleets exist in Southeast Asia.  The panga was designed by The World Bank in the 70's to provide a safe vessel to commercial fishing fleets in underdeveloped parts of the world, but that is a different story.

Anyways we loaded all 12 of us plus our Cpt. Zapatito ( little shoe) onto the boat and we headed out. I think it was the first time for two of the kids Gia and Luca to have been on a boat like this, so they were intimidated.  I advised their parents that it would be better to have them in the stern behind the porta potty so that for one it would feel calmer, and two they would not be able to see the waves. It look a little while and soon, Gia at least had a smile on her face. 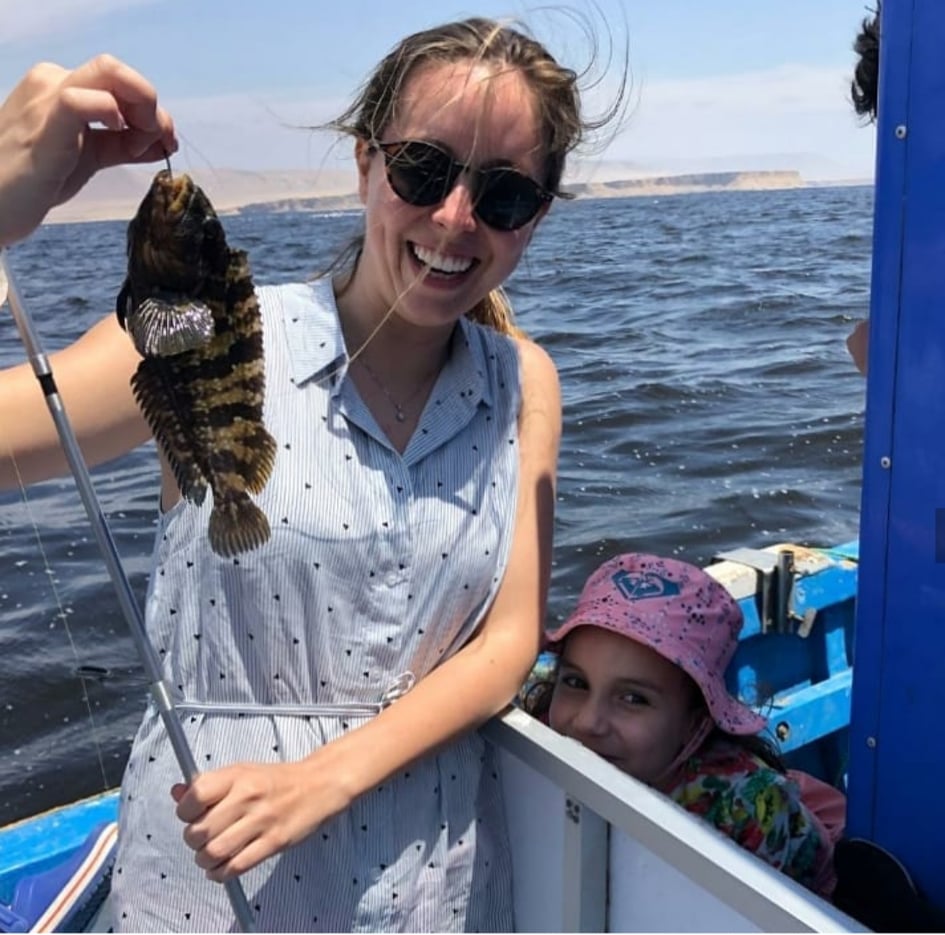 Fiona with a huge smile on her face, and Gia shy but getting in on the shot.

Zapatito had a barrel full of red crab for bait, the same red crab that we see Bluefin Tuna eating in Southern California.  He anchored us next to a protruding rock, and we proceeded to drop the red crab with small hooks on the two rods that I had brought and the handlines that Little Shoe supplied.  Soon we were caching all sorts of small fish. What they were I have no idea.

Daniel and Biaggio team up on this one.

Biaggio, was the calmest of the kids, and not only did he catch the most fish, but he picked up things fast.  Soon, he was re-rigging his own rod. The fact that he had the camera in front of him, and was the center of his dad (Paoloâ€™s ) attention probably helped.

Biaggio shows his dad that he can put the line through the rod and set up his own gear.

We spent the rest of the trip,  eating , drinking, and playing games.  Had some cigars for new years, but again, this article is about fishing, so lets go back.

The weekend was ending and Gia and Lucca had school so the Paloma and Jersen headed back.  Fernanda and Daniel also had worked so they also headed North to Lima. This left me, Fiona, Paolo, and Biaggio in Paracas.  It was time to do some fishing. We called up â€œLittle Shoeâ€ , and scheduled a trip for the next morning at 6am.

We arrived called him the next morning, and received no answer.  So we headed down to his fishing village. When we arrived, he lied to us, and said that it was to rough, but minutes later stepped aboard another boat, and headed out on a commercial trip.

Biaggio makes a cast into rough surf in Paracas Peru. His bait, a sand flea (in spanish "moi moi").

We were stuck at the port with rods in hand, so we ended up dropping baits right there. There was an old man, Iâ€™ll call â€œthe guru of the portâ€ sitting there catching one after another.  The fish were small croaker like fish and it looked like he was keeping them for a few days dinners.

I watched the old man, and eventually just went up and asked him what he was doing.  I asked him if we could rent some of his tackle for a few soles. He gladly obliged and gave us two of his hand lines with hooks, and his style of rigging included.  His hooks were small and snelled and he used a lead that was like a huge rectangular split shot that had to be crushed with pliers but would not come off later. He probably molded the things himself, or someone in the village did.

Me, Fiona, and Biaggio with the wild Paracas land/sea scape in the background.

With the newly fashioned rigs, we were ready, and we began catching them one after another.  Once we had a few it seemed that Biaggio was bored with the fishing , so it was time to move on to the next spot. 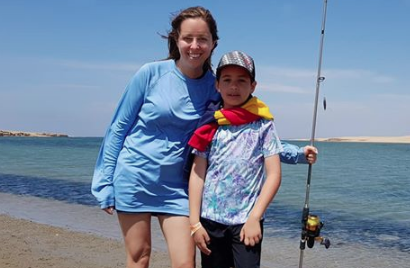 We tried a new beach, and casted out baits.  Paolo told me that at this beach there were â€œmui muiâ€ or sand fleas.  Me Paolo and Biaggio set out trying to catch them with our hands, and eventually were successful in catching a few.  Fiona put them inside of a gatorade bottle full of sea water. After some time she noticed that they were stressed and being how she is, she filled the gatorade bottle full of sand so that they settled down.

Soon we had two rods out with sand fleas, or â€œmui muiâ€.  One went off and it went off fast. It had some weight to it and could pull.  I was thinking it was a big â€œLenguadoâ€ or halibut, just from the way that it weighed when you pulled. It turned out to be something even more interesting. A guitarfish, the first one that I had ever seen. It was definitely a cool catch. 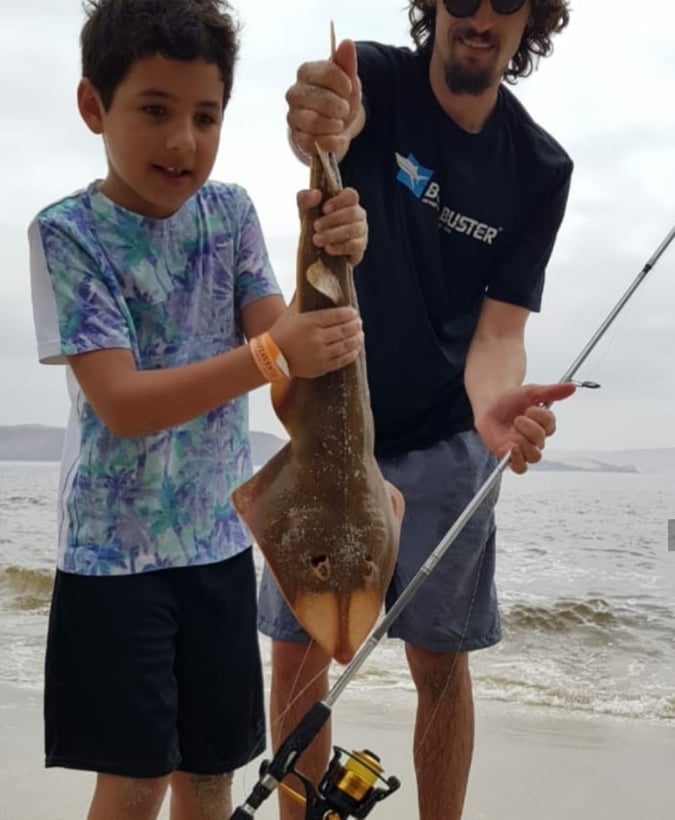 Biaggio and I with a Guitarfish caught in the surf on a Sand Flea in Paracas Peru.

The next place we fished had a dock.  Where we had lunch. There wasnâ€™t much action, but it was definitely a fun trip.